Let’s look at the evidence, ladies and gentlemen:

Yep, must be summer.

On the plus side, since I last posted (OK that was a while ago, but I’ve been busy – more on that later) England have regained the Ashes, Jessica Ennis-Hill and Mo Farah have won World Championship gold medals, Banksy has taken over Weston-super-Mare, and Chris Froome has won a second Tour de France.  The football season is back (ermmm…yippee?), Blackadder may well be on its way back (definite yippee for that one), and a new series of Dangermouse starts next month (so much yippee for that one that I may have just had a bit of an accident).

But let’s calm down for a moment and look at the bigger picture.  No wait, that’s boring.

Instead, let me tell you why I’ve been so horribly lax in my blogging of late.  It’s not very exciting really, but justifiable – Chez Hobbit has relocated from Devizes to Calne.  Now those of you that have moved house within recent memory will recall the butt-clenching horror that surrounds a move, and this one was made all the hairier for being a sale combined with a move to a rental property that had to be fit for cats.  Now landlords the world over may love pets, but they sure as hell don’t want the pesky little buggers in their properties, and that meant a very nervous time whilst I found somewhere that was (a) large enough for all my tat, of which there is plenty (b) nice enough to sate my snobby tendencies, and (c) cat-friendly and close to family to enable cat-sitting duties when I am away.

Luckily I found a place in Calne pretty quickly, though I had to loosen the purse-strings quite considerably to make it happen.  And for a few blissful moments I was chilled about it all…even got moved in OK (though not without a few bruises and scrapes to both furniture and myself), and looked forward to unpacking.  Our big old cat Fudge was inserted into his new house which – with the expected level of feline disdain – simply became a different big box to lounge around in.  He 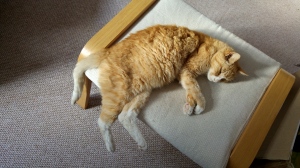 settled in very nicely, but then after a few days started to show signs of really not being very well at all, in an oh-my-God-he-looks-so-old kind of way.  To cut a not very long story even shorter, we had to take the horrible but inevitable decision to take him for one last journey to the vet’s, where he was sent on his journey to be with his sister Cassie, who we lost earlier this year.  So after all that faffing about finding a place he could be happy in, he lasted nine nights in his new home.  To say that I was heartbroken would be an understatement, and the house feels…well, odd.  Not only does it still feel like it’s not my house at all – still boxes everywhere, new bits of furniture, can’t find anything in the kitchen, the usual things – but now I have no cat.  For the first time in 25 years I’m not opening the front door to a squeaking ball of fluff demanding food.  It doesn’t feel right, it doesn’t feel normal (for my definition of normal), and it doesn’t feel like home.  Not yet, anyway.  It will, I am sure, but right now it just feels soulless and empty.

But the whole relocation episode has introduced a new term to me, one that came about thanks to a beery discussion in a pub in Nottingham.  I was discussing the house move with Jon and Joanne from The Rather Tasty Tea People, and specifically how many of us in the western world have a propensity to hoard things and never use them.  My example was cups and saucers.  I have plates of three different sizes, dessert bowls and pasta bowls from the same Denby range – all of which get used regularly.  But the matching cups and saucers?  Unwrapped them 10 years ago in Devizes…put them in the cupboard…wrapped them up again in July…unwrapped them in August in Calne…suspect the cycle will repeat at some point in the future.  All of which Jon described as ‘nomadic crockery’, which I thought was a very romantic and lyrical way of describing migratory earthenware.  I have visions of teacups on majestic stallions sweeping across the Mongolian steppe, yurts in the distance…

Time for some congratulations.  The Pink Chilli Hobbit, otherwise known as Kerry, has been working bloody hard to develop her company PinkBox Boutique, and she has been given a Mumpreneur 100 Award in recognition of the quality of her business and her commitment to getting it going whilst dealing with the trials and tribulations of being a mother and grandmother (oh, and the difficulties of having been married to me for a few years, but let’s gloss over that bit).   Many, many congratulations to Kerry, well deserved, and of course we hope she’ll continue to be one of our band of itinerant chilli peddlers for many years to come!

You may recall in my last blog that the South of England Show was notable for the large amount of pastel-coloured corduroy trousers on display.  The New Forest Show, along with frankly epic amounts of dust, departed from that theme by going for Blazer of the Day instead.  There must be something about these country shows that brings out these kinds of people – you don’t see them anywhere else, with the possible exception of a Cotton Traders catalogue – but at least it gives us traders a bit of a giggle when we spot a candidate and start waving at each other in a ‘did you see that one?’  kind of way.

Shortly after my trip to Hampshire I worked at a very unusual event, a pet show near Coventry.  This was notable for several things.  Firstly, the wasps made their first appearance of the summer, and all I can say is that I hate the bloody things.  Nasty, stripy little buggers, coming over here and stealing our jam, why don’t they bugger off back home…  As a consequence I now have one of those zappy tennis racket-type things that makes a very satisfying BZZZZZZP noise when I catch one of the winged terrorists, so that’s satisfying my blood-lust somewhat.

Slighty more relaxing were the alpacas.  Very cute, very skittish, very curious about the world about them, they look fab and damned well knew it.  Proper posers.

The most surprising thing I saw, and had the privilege to hold, was a skunk.  A lot bigger than I’d anticipated, and one of the most chilled-out, relaxed critters I’ve ever had the good fortune to cuddle.  Not in the least bit smelly and really relaxed, he was virtually asleep as soon as his owner handed him over to me.  Not called Pepe le Pew though, which I thought was virtually the law, like all spiders being called Boris.

Lastly was the Burmese Python.  Big, heavy, and lovely to hold, he was definitely not of the cuddly variety, but if any of you have held a snake before you’ll know that they are gloriously silky smooth and not creepy at all.

One thing that I saw, it being a pet show and all that, was several of what I like to call ‘handbag dogs’ – you know, the yappy little sods that are danger of being trodden on and squished – wearing hats.  Trendy baseball caps…spangly peaked caps at rakish angles…dear God, one of them was also wearing a tutu.  A bloody tutu.  Now I am well aware that people will treat their pets as children, I know all too well from recent events that they are showered with love and affection…but if I made one of my girls dress up in a tutu and a spangly baseball cap I think I’d have received a 3am visit from the paramilitary wing of the NSPCC.

I’m guessing that my mood at the pet show wasn’t helped by the lack of sleep I’d had in the hotel I was using.  The walls were a little on the paper-thin side, so much so that the herd of elephants in the next room managed to make more noise than two skeletons shagging in a tin bath, and to be fair I think they were only cleaning their teeth.  Repeatedly.  Banging cupboard doors at 4am in the process.  Maybe it was the NSPCC preparing a raid…

And on that note, I will leave further rambling thoughts to another day.  I’ll try not to leave it this long next time…though I think I said that last time as well 🙂

CASSIE IS CALLING YOU, FUDGE.  IT’S TIME TO GO.

One response to “Nomadic crockery”