No rest for the wicked

Well here we are again…it doesn’t seem like that long since I last posted anything, but apparently it’s been six months.  What…how…have I been asleep?  Well the short answer is yes, but read on, dear reader, read on… 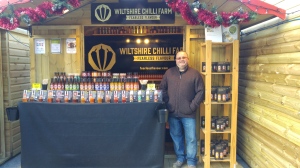 The back end of 2015 was, as expected, the full-on Christmas assault.  Now having been in Salisbury the year before I had a much better idea of what to expect from the market this time round, but it’s still a major exercise in logistics, willpower and stamina.  Twenty six days in a row is not the longest market…I get to go home every night and sleep in my own bed…and of course it’s not relentless sell, sell, sell every minute of every day…but somehow the drain on this hobbit’s reserves seems immense.  Might have had something to do with a diet consisting largely of cereal bars, meals that go ‘ding’ and caffeine…with the occasional hot chocolate thrown in for good measure.  This is not a healthy business to be in sometimes.

Of course I had stock collections to do, which added to the mayhem, but I managed to get into a rhythm with those and the days went by quickly enough.  And it really helped having some familiar faces around me, guys that I’d traded next to in 2014 – we’d formed a merry little band of bewildered traders, and co-opted some new members into Scrooge Central along the way.  Still, it was a successful market once again, and hopefully I can get in there again this year.

One of the things that gave us an added headache just prior to the Christmas market was the decision to rebrand.  I’d been approached at last year’s Royal Cornwall Show by a design agency, Buddy Creative, touting for business, and after looking at their brochure we decided we’d get them in for a chat.  We hit it off really well with them, and took the plunge.  They came up with ten different concepts for us to consider, with a view to us picking one.  We failed.  Dismally.  The best we could do was keep it to two, with a bit of a third thrown in as well!  The trouble is this, and this will come as no surprise to anyone that’s met a few of us – we are all very different types of people.  Differing ages, lifestyles, viewpoints, possibly even species – so getting us to all agree on something is like getting Donald Trump to not be a pillock – it’s theoretically feasible, but the bookies ain’t taking odds.

So off the designers went to work up phase 2 – revisions of our chosen concepts.  Once again these were presented, and once again we argued long and hard.  But this time we were a smidgeon more grown-up about it and asked ourselves some really searching questions like ‘what are we trying to achieve’, ‘who are our target audience’, and more importantly ‘how can we twist the answers to give us what we instinctively want to do’? 🙂

And so…finally…a decision was made.  Further refinements were to take place, of course, and a vast amount of checking and re-checking of label text went on (we even managed to argue amongst ourselves about that)…but eventually what appeared was a great new look and feel that we are massively, humungously proud of.  We looked fine beforehand, but now we look just so damned sexy. 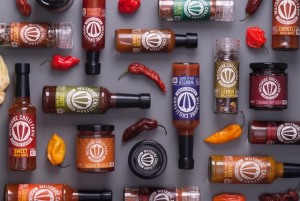 As part of the process we were encouraged to look at naming conventions and have a theme.  Radical suggestions, we thought, we’d never consciously not had a theme – but that’s what had happened.  So it was goodbye to Hellmouth, and hello to Caribbean.  Chocolate Habanero is no more…to be replaced by Dark Habanero.  Both products are exactly the same recipe, just renamed.

Hellish Habanero has – for now at least – bitten the dust.  In it’s place (sort of) is a new crowd-pleaser – Reaper Habanero.  Similarly smoky but a bit hotter, it’s proved to be mega popular and we don’t seem to be able to make enough of it.  Good old Septenary had a tweak as well, now being made as a Trinidad Scorpion sauce – the hottest all-natural sauce, and a real winner with the heat fans out there.  And God Slayer…well, we wouldn’t dare mess with the profane insanity of that, would we?  It’s still here, lurking under the counter to inflict on anyone daft enough to utter those words – ‘nothing’s ever hot enough for me’…

Everything else is the same as it ever was…just looking sharp in a fabulous new suit.  Much more colourful, bolder and sharper than before, but as lovely as ever.

It won’t stop with just new labels of course.  We’ll have new branded gazebos on display at events, new banners and flags, a new website should be on its way soon…we’re basically tarting up everything to be tartier than a tart’s handbag.  And if we can find enough pennies down the back of the sofa we’ll be sporting some new corporate threads as well, though right now we’re still buried under about ten layers of thermals so it’s a bit pointless.  It’s spring, allegedly, but by golly it doesn’t feel like it 😦 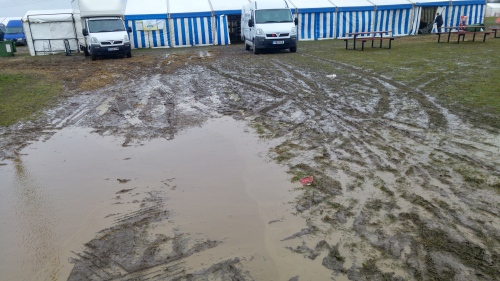 So as you can see we were busy at the fag end of 2015.  The theory was that we’d have some spare time at the start of this year to recharge batteries, take some time out and recover our composure and really plan 2016 with military precision.  Yeah, like that’s happened…the problem with embarking on a plan for world domination is that it’s just bloody relentless!

So relentless in fact that I’ll have to tell you about it another day…so, same time next month?  Don’t mind if I do…

Never did find the away kit.

(A gold star to anyone that understands that reference!)