Hail to the Kingham

Another new week dawns bright and clear, and as the majority look forward to a 5-day slog till another period of relaxation, your intrepid bloggist gets to kick back a bit and ease his aging bones after a couple of days trading.

Royal Wootton Bassett was – as always – a pleasure, and it was lovely to see friends both old and new.  As is my wont I headed off afterwards to see the mighty reds beat Preston at the County Ground, a stirring display not much in keeping with recent performances, if truth be told.  There’s hope for the future yet, even if our big-name striker has been arrested again.  Berk.

The Pink Chilli Hobbit ran the market at Sherston on Saturday and did better that I had the month before – they must be susceptible to her feminine wiles!  I know she enjoyed it and loved the venue, which is good as she’ll be in the chair for a lot of Sherston events this year as it jumps around the calendar – it tends to clash with other regular markets. 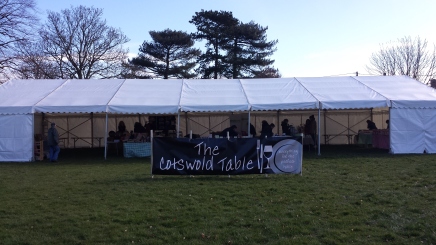 I traded at a new event for me on Sunday, one that’s only been going a short while – The Cotswold Table in Kingham.  Now I’d never heard of the place before recently, but it’s a lovely Cotswold village, with a pub by the green, lots of enthusiastic foodie locals, and a quarterly event that was quite lovely to attend.  Thankfully I chose to be in the marquee rather than outside, as the day brought two tremendous downpours – one of rain, and one of hail.  The first had people rushing for cover in the marquee (good for sales), the second had people giving up and going home (not good for sales).  Still, it was a very well organised event, busy enough even with the typical March weather, and I look forward to going back for the next one in June.

On my journey back from Kingham I stopped off at Burford Farm Shop for a look round.  As usual for that kind of place I found some lovely stuff for sale, and weakened by hunger and thirst as I was (yeah, right) I came away with a couple of things that can best be described as totally fab.  Fentimans Curiosity Cola is a real favourite of mine – it’s how cola used to taste when I were a lad, back before the wheel was invented and when you had to collect your electricity in buckets from the well.  It’s not good for you – full fat cola that leaves your teeth feeling rather furry – but by God it’s good.  I also found Mr Trotters Jalapeno Chilli pork scratchings – not one of your five a day, but utterly delicious.

Later this week I’m planning to head to the Farm with camera in hand to start on my process of immortalising the 2014 season on (digital) film.  Look out for a further entry when I get round to sorting the pictures out.  If I can work out how to use the super macro mode on my camera there might be some close-ups, otherwise it’ll just be wide-angle pics of Jamie looking dishevelled and knackered, as usual!

One thing to l 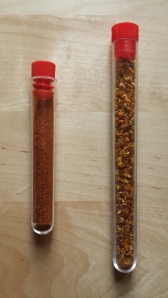 ook out for at markets soon is the new range – chilli powders and flakes.  OK, so the flakes are normally the people behind the table, but we have some rather medical looking test tubes of various substances – including Scorpion powder – being made up as I type (that means Jamie’s beavering away in his kitchen, folks!).  They’re being priced competitively, so come and see us at our markets soon 🙂

And with that I’ll leave you in peace.  Have a good week!