Tag Archives: behind the scenes

OK, so I’m not sure if gazebos (even anthropomorphised ones) have eyes, but there was definitely a certain frisson in the ether when Princess Pinkbox and King Gazebo finally met on Sunday.  As befits gazebo royalty though it was an intensely formal affair, and decorum dictated that a respectable distance was kept at all times, although your guess is as good as mine as to what may have happened whilst our backs were turned.  If Pink Chilli Hobbit starts to hear the patter of tiny gazebo legs in a few months…well, I guess we should have kept the covers on.

That was at the Swindon Dragon Boat Race, which looked like a real hoot for the competitors.  I never knew that Swindon was twinned with Hawaii (although the football teams are on a par), but the sight of sinewy, sun-blasted youths powering their way through the surf to stirring anthemic music theme is  something I will never forget.  OK, OK…in the interests of reporting accuracy it was more like the local accountancy company (complete with Beryl from HR) trying to beat a team with Rocking Robin (Swindon Town’s mascot, for the uninitiated) as the drummer, racing to the theme tune from Hawaii-Five-O…but you get the drift.  It was good fun, I have no idea who won as we were away from the action a bit, but everyone seemed to enjoy themselves. 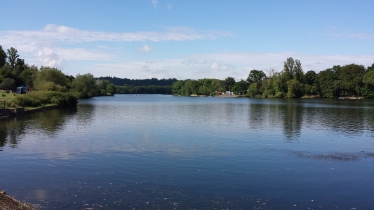 Apart from that it was routine trading in Lechlade and Reading, nothing of real note apart from a most confused response from a customer at the event in Reading.  He’d already announced himself as someone that doesn’t like spicy food, but – and kudos to him for giving it a go – he said that if you don’t open yourself up to new experiences you don’t know what you might miss.  He tasted the Mango Hot Sauce, which as we know is sweet, fruity and yet packing of a surprising wallop…and then said ‘that tastes really nice, but I hate it’.  I’d rather deal with customers like that – willing to try it out even in the knowledge they probably won’t like it – than the sort that sneer at you and pull a face like you’ve just pooed in your hand and thrown it at them.

Now here’s an interesting article.  You’ll remember the grief I was having last week in making Naga Chilli Salt – well, seems my discomfort was well placed – check out the article at this link.  It doesn’t surprise me, the basic chemical in chillies is basically a poison (as so many things are).  Don’t let that put you off though 😉

So in a bit of a departure this post I’m not going to wobble on about the weather, England’s World Cup non-performance, or any of that sort of drivel.

his week I shall give you a few behind-the-scenes snippets of life in the chilli kitchen, just so that you know what we mean when we go on about cooking, bottling and labelling.  Here’s one of our sauces in its pre-cooked state, in our big cooker.  Any ideas which one it is?  (No sneaky scrolling down to see the answer now…)

That’s right – it’s Mango Hot Sauce.  I know, I know…it looks nothing like it, but trust me.  The mangoes are at the bottom of the pan, waiting to be blitzed with our monster blender, as you can see below.

This is not the Masterchef school of cookery, it’s pretty industrial in it’s methodology – it has to be that way to produce the numbers of units we do, even with a smaller batch.

Even so it is done with a great deal of care and attention.  Ingredients are measured out accurately, temperatures are controlled carefully, and timings are of paramount importance.  True, there is an awful lot of verbal abuse flying around – it seems to aid the flow of the day – and keeps spirits up when there’s a heck of a lot to do.

So once everything’s been blitzed it’s left to cook, usually with the blender left in situ to continue to break up the chunks so that the sauce goes through the bottling machine.  Watching the sauce get sucked into the murky depths, only to go round the pan and appear again can be quite hypnotic.  It’s almost like a screensaver…

So once that’s all cooked it gets transferred to the bottling machine for…well…bottling.  Now it’s a bottling machine with a semi-automatic process, in that the sauce gets poured into a big hopper, the operator hits the foot pedal (pretending to be John Bonham or Neil Peart whilst doing so), desperately hoping that he’s remembered to put a bottle under the nozzle.  This is almost always the case, but in the mindless repetition that is the bottling process occasional mistakes occur.  We’ve all done it…

For a batch of Mango in the big cooker like this one you’re talking in the region of 750 bottles, so you can see how the occasional lapse in concentration occurs.  We are but flesh and blood, ladies and gentlemen, and the later in the day it gets, the stupider the flesh and blood becomes. 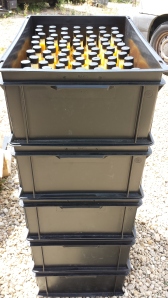 The Leaning Tower of Mango

But by and large it goes without incident, and you end up with large numbers of crates stacked up like the picture to the right waiting for some helpful sort to load up the sack truck and wheel them over to the old kitchen for capping and labelling.

Capping involves slipping a heat-shrink cap onto each bottle and then holding it in a cunning device that is basically an electric coil with a v-shaped plate in front of it to rest the bottle.  The caps shrink in a second, and then on to the next stage – which I hate – sticking the ‘best before’ stickers on.  There is no easy way to do this with standard bottles, as we put the stickers on the bottom of the bottle to stop them rubbing off in transit.  Tedious isn’t the word.

Labelling is another semi-automatic process.  Another machine with a foot pedal, though for reasons I’m never quite worked out we have it at counter level and tap it with a hand.

And that’s what we do…time after time after time.  It’s pretty repetitive so we take it in turns to be on the bottling machine, or capping and labelling, or making salts, or whatever else it is we do to bring our products to you.  Last week though – thanks to Jamie trying to remove his own fingers in a van door and someone taking the stabilisers off Bonds bike, guess who got be Mr Bottle for 2 days?  Though it’s a bit repetitive it’s what gives me a real buzz when I sell something on the stall – I can quite often say ‘I made that!’ – and you don’t get that from a checkout operator in the supermarkets.

So, anything else of interest out there this week?  I have to admit to having lived in a bit of a chilli-shaped bubble over the last few days, so it’s entirely feasible that the Martians have landed, taken over the White House, been ousted from office (probably by Bruce Willis wearing a sweat-stained vest) and order restored.  I just wouldn’t have noticed.

Greener by the day 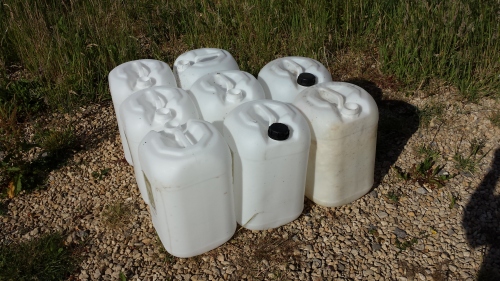 Banksy has nothing on us 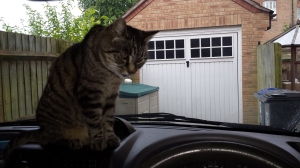 On the left – this is why I’m late getting to work some days.

This weekend coming will see us in Bristol’s Temple Quay, Tidworth, Devizes, Corfe Castle, Sheffield, the North East Chilli Festival, Corsham, the Cotswold Show, Frome, Shaftesbury, Marlborough, Bath, Swindon, Oxford and – after all of that – the pub for an adult beverage.  But not Eindhoven…not yet, at least.

Back to the football, such as it is. Another turgid match where the favourite goes through.  Boring!

Sayonara peeps, catch you next time.