Back pressure build up 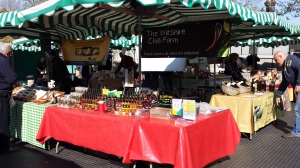 Yes folks, it’s now been a whole year since I was catapulted head-first into the crazy world of chilli peddling.  On October 5th 2013 I went to help Jamie at his stall in Devizes, only to be left in charge for the morning in what was to become my first ever trading day.  I can well remember the feeling of utter terror that washed over me as our illustrious leader left me to my own devices.  Although an enthusiastic fan of the product range I was hardly an expert, but I racked up reasonable sales – and haven’t looked back since.

A lot’s happened since that point, both professionally and personally.  I’ve bought two vans, which have occasionally run smoothly.  I’ve learned a lot about chillies, though it’s always a work in progress.  I’ve been loudly and menacingly accused of blasphemy.  I’ve developed a love/hate relationship with a bottling machine.  I’ve become known as the most irritatingly organised stall holder at a number of markets.  I’ve become a committee member of the Wiltshire Farmers Market Association.  I’ve been wet, cold and miserable on any number of occasions.  I’ve been hot, sweaty and bothered on any number of occasions.  I’ve had to embrace Christmas enthusiastically.  I’ve adopted market trader cheeky chappie as my language of choice on school days.  I’ve met Boris Johnson.  I’ve met the father of the lead singer of one of my favourite bands.

I’ve met all manner of customer, the vast majority of which are delightful, or at least harmless.   I’ve developed a Spotter’s Guide…

The Professional  You can see them a mile off.  They have the fixed stare of an addict, and they are making a bee-line for the stall, cutting across traffic flow and almost always heading to the hot end of the table.  Usually under 40, very often male, keen to find something new.  Not always the best buyers as they have cupboards full of the stuff (often our products).

The Interested Amateur  These are customers that like a bit of spice in their life, but aren’t sure if they can do the really hot stuff.  Often enthusiastic fans of our jams and Mango sauce, they don’t often go for the really hot ones but might try them for a giggle.

The What Have You Got Here’s?  Not chilli fans – yet.  Are the sort of person you like to see at events – they’re going to try a few things and see if they like it.  Usually go away with a milder jam or one of the less challenging sauces, but are occasionally lured into buying a hot one.

The Free Luncher  Come along and try everything, often so quickly that they can’t possibly be tasting anything.  They’ll have been spotted walking past the cheese stall, not breaking stride as they scoop up handfuls of samples for a free feed.  They are the main reason why we don’t use crackers for samples any more.

The I Don’t Like Chilli  Can be further subdivided into:

The Face-Screwer-Uppers – look like a bulldog chewing a wasp as soon as they get within ten feet of the stall.  Are keen to tell you what damage chillies do to their digestive tract, often at length, and quite graphically.

The I Once Had An Experience – have based all their knowledge of spicy food on having eaten a dodgy Vesta curry forty years ago, and have had nothing hotter than a korma since.  Scarred for life, they refuse to countenance anything exotic.  Probably vote UKIP.

The Will Try But…  – can be lured into trying something (usually Sweet Chilli Sauce) then run around like someone’s set fire to their tongue.  At least they’ve had a go, bless ’em.

The Can Be Persuaded – although they say they don’t like chillies, they’ll then agree that they do like sweet chilli sauce…and once they try ours you have them on the hook.

The Gift Buyer – seen a lot at this time of year.  Don’t do chillies themselves but are looking for presents for the family and friends.  Quite often go away with a product with a silly name (Bunny Burner, Hellmouth etc).

The I Can Outdo My Dad – will try the hottest thing on the table and stand there getting redder and redder whilst claiming that they like it. Often accompanied by tears.

The I Can Take Anything – occasionally spotted, indestructible children for whom nothing is hot enough.  Fear them.

The Lovely Children – the ones that you persuade to try Sweet Chilli or Habanero Gold who give a lovely beaming smile when they actually like it.  Often followed by excitable jumping up and down and persuasion of Mummy/Daddy to buy it pleeeeeeeeeeeease…

The Criers – persuaded by parents to try something a little too hot, will burst into tears.  Another good reason to have lollipops on the stall.

The Lad  All swagger and attitude, often approach with a bunch of mates and keen to show off.  ‘What’s the hottest you have’ is the question.  One application of God Slayer later and they’ve gone surprisingly quiet and their ears have gone purple.  Swearing often ensues.  They then buy a God Slayer to take down the pub.

The Frightened Rabbit  An odd one, this.  They come up to the stall, start to look at the display, but if you speak to them they startle and run away.  Stallholder left in bemusement and checking to see if he’s applied deodorant that morning.

The Arm Folder  Stand five feet from the stall, arms folded in a very defensive pose.  Refuse all entreaties to get closer and don’t make eye contact.  Bizarre.

The Huggers  They’re bumped into their bestie at the market and decide to catch up on how Auntie Ida is, whether little Jack/Lily has started pre-school yet, or how fantastic their villa holiday to the Dordogne was…all this taking place directly in front of the stall, blocking access to other customers.  They are utterly oblivious and often find themselves being forcibly given samples on sticks just to remind them that they’re in the bloody way.

The Chilli Salt Convert  Don’t like chilli sauces, but will taste the Chipotle Chilli Salt, and once they’re done that they’re the biggest fan ever.  Often go away with one for their Mum/Dad/mate as well.

The I’ll Have One Of Each  Still waiting to meet this person.  One day, one day…

I’m sure there are many more…every market throws up another personality, another type of shopper, another mystery for us to unravel.  It’s what makes it fun, trying to work out which category each person fits into.

On the product front we’ve cooked a lot lately – partly because we need the stock for the Christmas rush, partly because there’s a whole lot of chilli picking going on and we don’t have freezer space for everything – we just cook ’em straight

away.  That means we have the annual special edition box sets out.  This year sees a reappearance of the Voodoo Habanero set – Fruit Burst, Peach Habanero and Chocolate Habanero – which is already proving very popular.  We’re also producing a Fatalii set – with yellow and white Fatalii sauces.  We’re the only farm in the world to be growing the white fatalii chilli on a commercial scale, so we thought we’d better do

something with it!  The white Fatalii sauce is made with pears, so a little less sharp than the yellow Fatalii and it’s lemony twang, but they complement each other beautifully.  The fatalii set will be available in a few weeks, but orders being taken now 🙂

Of course we’ve reached the time of the year when standing outside selling stuff is getting colder and wetter, but we’re still flat out on the event front.  I’ve been to Salisbury, which was good practice for my extended stay there later in the year; a new farmer’s market opened at Sutton Benger, near Chippenham – a lovely little village, with great support from the landlord of the Bell House Hotel,

whose car park we used, made it a very successful event; Pink Chilli Hobbit has started running a department store under a gazebo – lots of different products, including chilli stuff, all at one 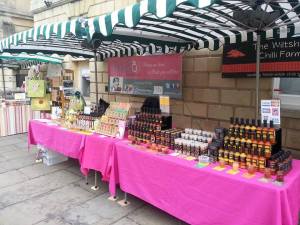 stall!  She’s doing a great job at combining a number of different lines in one place…it certainly adds flavour to markets where the producers don’t see benefit of going individually, but a bit of everything all adds up to a worthwhile venture.

Less of the big events in October, but plenty of regular markets to keep us busy.  This coming weekend we’re in Leicester, Reading, Gloucester, Swindon, Bath and Oxford.  We soon descend headlong into full-blown Christmas mode, so expect the Bah Humbug hat to make a reappearance!

That’s all for this week.  Keep the faith, clunk click every trip and toss me a droob.

Nights are drawing in

Hope to see you there! 🙂

For once it was actually nice to be out and about rather than huddling under a blanket as the rain lashed down outside.  And, blinking sleepily as if they’d been hibernating for the last few months, the public came out to shop.  Not massively so in Frome it has to be said, but then I think that people were going “ooh look, sunshine” and staying outside – and I was, of course, at an indoor market.  I have impeccable timing, as you can tell.

On the other hand, my first taste of Bristol’s Tobacco Factory Sunday market was nice and busy.  If you’ve not been there before it’s worth a visit – not just a farmers’ market, but all sorts of stuff on sale – clothes, food, books, a right old mish-mash.  There was a lovely feeling (possibly due to the weather), we had 80s music playing all day, and all the stall holders were as always friendly.  I’d certainly go back there again – this time I was covering for someone who was indulging in adult beverages on Saturday night 🙂

My ex Kerry (aka The Pink Chilli Hobbit) also did her first Wiltshire Chilli Farm market in Chippenham.  We’re waiting to crunch the numbers but it sounds like it went well.

Football on Saturday wasn’t so great, but then as a 35-year veteran of watching Swindon play I should know better than to get my hopes up.  Cracking winner from MK Dons, to be fair.  Even so – dammit.

Great news from Sochi this morning, with Kelly Gallagher winning a gold for the visually impaired super-G slalom.  Having been on the slopes many, many times and had more than my fair share of brown salopette moments I just can’t imagine what it would be like to ski with a serious visual impairment.  Serious kudos to Kelly and her guide Charlotte Evans, a fantastic achievement.

A couple of days of paperwork, looking for further markets, following up potential wholesale leads and catching up with the housework beckons.  It’s a rock ‘n’ roll lifestyle, you know.

Catch you later in the week before (whisper it quietly) I have a weekend off.  Beer will happen, rest assured of that 🙂