Go away, it’s Monday and I’m not coming out to play

Well, where do we start this week?

Weather-wise it’s been absolutely fabulous over the weekend…unless you’re called the Pink Chilli Hobbit and have headed off to the wettest, windiest place in the UK – the Isle of Mull.  It’s her annual holiday destination these days, and I expect to hear tales of whales and discussions on puffins when she gets back next week!  It does look great up there though, it just tends to catch what the Atlantic weather systems throw at the UK square in the teeth.

So I’ve been let loose from my normal habitat of the south of England this weekend just gone, venturing up to the vaguely northern climes of Cheshire.  I know that’s not really very far north, but when all the place names are redolent of rugby league teams it must be far enough up to warrant the description.  Tatton Park just outside Knutsford (City Limits) was the destination, for a country show that turned out to be distinctly less tweedy than Thame a few weeks back.  I’m guessing it’s because the area is much more premier league footballer than rich landowner, but the comparisons are fascinating:

Thame – accents varying from Mockney to West Country, with an abundance of Home Counties

Tatton Park – Scouse and Manc accents, with the occasional Black Country frontier gibberish thrown in to remind me of my days at North Staffs Polytechnic.  Nearly needed a phrase book at one point.

The one thing that was markedly different from Thame was that my renewed lollipop supply remained firmly in place, although it was severely depleted by the end of the weekend.  Maybe it’s my sign that helped keep the felons away!

It’s certainly gained a few retweets today via Planet Rock radio.  It seems that my  attempt to ensnare a straying WAG put a smile on a few Monday faces.

And did it work?  That’ll be an emphatic no 😦 Will just have to keep putting the sign out.

What’s with the owl reference, I hear you all cry?  Alright, alright, maybe not all of you…but someone must have thought it.  Well it’s like this…there was a falconry display held in the main ring a couple of times each day, and what became apparent after watching it from King Gazebo is that: 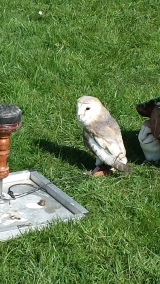 The last fact was very apparent with one owl that was – to be fair – just coming back to show work after a long period on the sidelines.  After being released from his training line for the first time in 2 years he just sat on his perch and looked as confused as a UKIP politician trying not to sound racist.  After much cajoling, offers of tasty morsels and noises designed to encourage owlish types he sill sat there, refusing to budge.  In the end the handlers had to go and carry him back to his box.  Well, it was hot – why fly when someone can carry you?

As well as the falcons there were some serious outbreaks of cute…I give you…drum roll please…FLUFFY BUNNIES!!!

I love the fluffy bunny huddle in the second picture – it’s like they’ve seen me with the camera and suddenly gone ‘sh*t, he’s seen us – how do we get out of this?’ 😀

Another thing that struck me about the area around Knutsford is the ostentatious wealth.  The houses are seriously upmarket, and the de rigueur architectural feature appears to be a bloody big front gate, preferably wedged between pillars of some considerable size.  And you know what I didn’t see whilst passing any of these houses?  People!  All the houses appeared locked and uninhabited, although immaculately maintained.  I guess when you have enough money for a house like that, you have enough money for several houses like that. 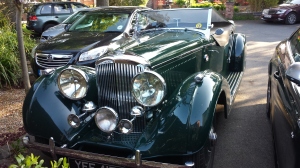 This was in the car park of the B&B I stayed at – a gorgeous, beautiful old Bentley.  I saw it on the road as well, and the noise from the engine was just wonderful.  It may not be economical to run, or meet EU emissions rules, but by ‘eck it has soul.

My 5-mile journey from the B&B to the Country Show took me past Range Rover, Bentley and Rolls Royce dealerships, huge cubic behemoths of showrooms with millions of pounds worth of vehicles inside.  I could almost feel my trusty 145,000-mile Peugeot van shrug with Gallic haughtiness as I drove past 🙂

Some final shots from the weekend – more hook-beaked raptors, and the guys from the Seven Dials Rapscallions – possibly the best-dressed shoppers I’ve ever had. 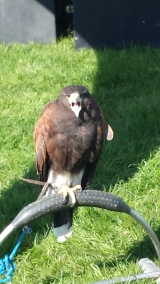 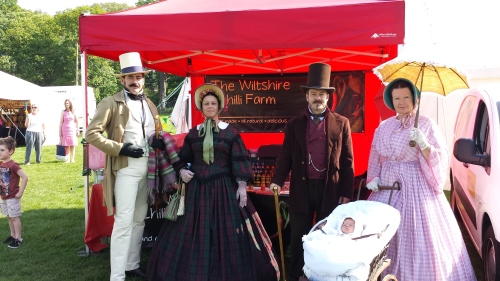 Back to the farm this week, lots of production to be done to stock us all up for the next couple of weeks, which will include the Royal Bath & West Show, one of our flagship events.  For this weekend though you can find me at Royal Wootton Basset, Bath Green Street and possibly Salisbury (still awaiting confirmation on that one!).  The Pink Chilli Hobbit will be in Bradford-on-Avon on Sunday (if she doesn’t trip over a puffin on holiday, that is).  We’ll also been in our usual haunts of Bath, Swindon and Oxford, as well as Petersfield, Crabstock in Northampton and Marble Hill in Twickenham, the home of odd-shaped balls.  Blimey we don’t half get about.

Have a great week and look forward to another bank holiday weekend!