Hello everyone, hope you managed to have a nice weekend – the weather turned all British on us, which was fun.  A nice bit of sunshine on Saturday, but then an awful lot of dampness ensued, but we should really be used to that by now.

One for the ladies

Just a quickie this week as I’m preparing for the Royal Cornwall Show, which starts on Thursday.  This is one of my biggest events of my year, and promises to be an extremely busy few days.  I’m doing it on my own this year – the Pink Chilli Hobbit helped me out last year but I’m going solo this time round (echoes of real life!) – so that means getting down there on Wednesday and getting the gazebo up and stocked, then heading over to the campsite and sorting out my accommodation for the event.  As long as I allow myself enough time it’ll all be just fine and I won’t get too stressed, but knowing me something will come up that scuppers my plans.  Good weather would be lovely as there’s nothing fun about camping in the rain, but I’ll just deal with whatever is thrown at me.  You can find us at stand 404, hope you can find us (bit of an IT joke there…)

The Royal Bath & West was a huge success for us, well done to the guys for fronting it up and working their proverbials off over the course of the event.  It’s always one of the highlights of the year and we love going there.  Jamie, Bond and Beard shift

ed a huge amount of stock between them and spread our chilli joy (and in some cases pain) far and wide.  I’m not sure what kind of voodoo Jamie used in order to get two stands, but it worked!  We even came away with yet another award, this time for the best trade stand in the food halls.  It’s the second time we’ve won this particular award, so we’re really chuffed. 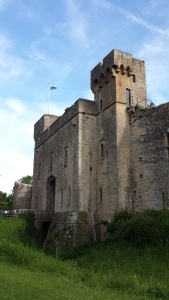 I was at Caldicot Castle for the Monmouthshire Food Festival, a lovely event in a brilliant setting.  The weather didn’t quite play ball, but what’s not to love about an event in the grounds of a castle?  The locals were lovely, I had the best bacon & black pudding roll ever, and came away with supplies of beer from Brecon Brewing (who coincidentally are official brewers of Terry Pratchett branded beers) and some fantastic chocolate courtesy of Black Mountain Gold, which I am trying very hard not to devour at warp speed.  Proving difficult.

As well as Cornwall this week we’ll be at the continental market in Bromley from Thursday through to Sunday, Devizes Farmers Market on Saturday and Swindon’s Designer Outlet on Sunday.  The Pink Chilli Hobbit will have her PinkBox Boutique stall up at Toby Buckland’s Garden Festival at Bowood House on Friday and Saturday, and Simon from The Chilli Hut will be deputising for us in Frome on Sunday.

Right…time to go and find the tent…it’ll be somewhere in the garage, just past Shergar and round the corner from Lord Lucan… 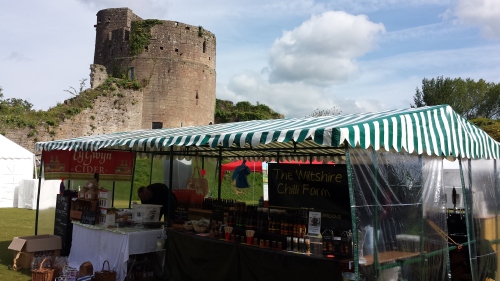 I would like to die on Mars.  Just not on impact.