It’s been a couple of weeks since my last post, mainly as I’ve not had masses to waflle about.  I thought I’d save up my random ramblings until I can pad them out a bit 🙂 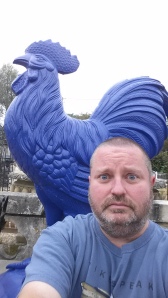 Though I have little to waffle about, it’s all go at WCF Central.  We’ve been cooking furiously (mainly furious when the bottling machine has a spitty fit…thank you Hellmouth) so we now have more stock in place than ever before.  Its’ causing us a bit of a headache, what with the need for a national crate mountain, but it puts us in a decent position in the headlong rush towards Christmas.  I know it’s still only just autumn, but us trading wallahs have to be ahead of the curve, otherwise there’s a danger of us getting caught with our trousers down if something unexpected happens.  A good productive day can see over 3,000 units produced without having to work till midnight – we’re getting good at this efficiency lark, you know.  Bond will claim it’s all down to his ‘floating’ role as Efficiency Bitch – soaking up all the odd jobs that sometimes get in the way of smooth running – but for the most part it’s down to good planning and days of monster batches in the big cooker.  They’re a pain to prepare for, but once cooked it’s just a case of bottle, bottle, bottle till you get bored of hitting the pedal.  Needs must though, we need the stock, and we have a lot more days like that to be prepared.

On the trading front it all goes a bit quieter at this time of year.  Yes, there are still plenty of markets and festivals, but the monsters of the summer are gone and everyone’s focussed on the upcoming horror that is the festive season.  Since my last update I’ve been to Reading, Gloucester, Tetbury, Royal Wootton Bassett and Wroughton – mostly places I’ve been to before, although the day in Wroughton was unusual.  I was asked to give a presentation to the Wiltshire WI for their Produce Day, which was fun.  I suspect the average age of the audience was the wrong side of 70, and the average natural hip quota significantly less than 2, but they all listened attentively to the producers there on the day, and asked plenty of questions – thankfully no difficult ones – not to me. anyway

🙂  I’ve been asked back to give a similar presentation at their anniversary event next April, so I can’t have scared them too much with my Don Estelle shorts and tales of incinerating potential Prime Ministers!

I’ve had a bit of a weekend off before that, taking a Sunday off to head to Wembley for an NFL game.  Now I know it’s still fairly new to the UK and so it’s a bit of a novelty, but it’s so much fun going to one of these games – the glitz, the glamour, the cheerleaders, the vastly overpriced pretend food, the cattle market that is Wembley Stadium Station afterwards…it’s not like that at the County Ground, I can tell you.  And you certainly don’t get Def Leppard as pre-match entertainment at  Swindon, though many would say they’re glad of that.

On a totally separate subject, something caught my eye today, and frankly I’m baffled.  I followed a brand spanking new Fiat 500 through Devizes, and I’m sure the owner is really, really proud of her shiny new toy…but why in the FSM’s name did she choose beige as the colour?  Now we all have our preferences.  I realise this.  I seem to have developed a preference for loud colours recently that can leave your retinas in a state of shock.  But beige?  For a car?  A little research leads me to believe it’s actually a colour they call ‘New Age Cream’.  Seriously, what the hell’s that all about?  It’s beige, people!  Eeeeuw.

Since my last post one of the most important decisions in British politics ever has been taken, with the result of Scotland’s independence referendum.  The result was, of course, the safe option of the status quo – one I think is probably the best for Scotland – but it does lead me to believe that far from it being decisive, we’re just going to have to go round the loop all over again in a few years until they get the answer the nationalists want.  I think, by the time voting day had come round, everyone in England was utterly sick of Alex Salmond’s weaselly fizzog appearing on every screen, and if the English had had a vote we’d had voted a resounding Yes just to get rid of the bugger.  A really vindictive part of me would have loved to have seen a Yes vote win out, just to see how an economy built on shortbread and little drummer girls in plastic tubes would actually work in the real world.  However we’re all still one big happy family, but just wait till Andy Murray wants a big cheer at Wimbledon next year…I think he’ll find a few less supporters next time round!

I was going to buy these but they were two deer

A busy few days coming up – cooking at the farm followed by days trading in Temple Quay (Bristol), Salisbury, Devizes and Frome.  The Pink Chilli Hobbit will be in Marlborough on Sunday, and the WCF Massive will also be in Neath, Reading, Petersfield, Oxford, Bath and of course Swindon.  We’re always in Swindon.  We try to leave, but just like Number 6 in The Prisoner, we get caught by the balls and dragged back.  Oh…sorry…caught by one big ball.  My bad.

That’s all for this week folks, apart from one very important question.  Take a look at the poster below, spotted in a local health food establishment.  WTF?